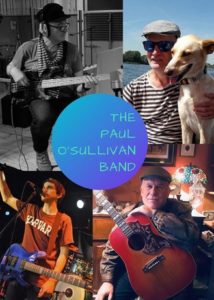 “One night, I was kind of just indiscriminately looking for Paul O’Sullivans on social media and a good amount of them accepted my friend request.” said O’Sullivan, who has become known as Baltimore Paul. “Eventually, their stuff started showing up in my news feed. And I’m like, ‘Wait a minute, we’re all musicians.’ You know, it kind of felt like the universe was daring me to do something with this serendipitous scenario.” So four of the Paul O’Sullivans around the world agreed to form a musical group aptly named The Paul O’Sullivan Band. The Pauls put out a single at the start of 2020. And when the world shut down due to COVID-19, they realized they had been working remotely together anyway, so they decided to use the lockdown to record a whole album. “Once COVID came, so many doors had shut on musicians,” Pennsylvania Paul said. “And [Baltimore] Paul opened up this door already, right? Then we had an extra purpose.”

I’ve just joined a rock band that play the same songs in the same order at every gig.
We’re OC/DC

I’m in a band! It’s called Lost Cat.
You’re probably seen some of our posters.

Al Gore and a computer scientist started a band.
The Al Gore Rhythms

Know in your heart that all things are possible.