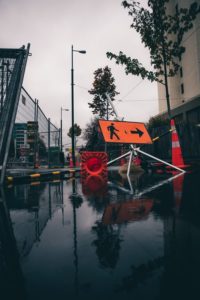 On Saturday, Leonard Shoulders strolled up to a bus stop in the Bronx. A handful of people stood around, waiting for their rides and looking down at their phones. Then suddenly, a hole opened up in the sidewalk and Mr. Shoulders, 33, plunged into it. Stunned bystanders who rushed to the edge of the chasm faced a ghastly sight: Mr. Leonard had dropped 12 to 15 feet into an underground vault teeming with rats. “Rats were crawling on him and he can’t move,” his brother, Greg White reported. “He didn’t want to yell because he was afraid there were going to be rats inside his mouth.” For about 30 minutes, Mr. Shoulders lay in the vault as firefighters tried to pull him out of the hole. He was eventually wheeled away on a stretcher by emergency workers. He suffered injuries to his head and arm, Mr. White said. Leonard is in fair condition. Since July 2019, the city has received at least 35 reports of sidewalk cave-ins.

The big apple has rats in its core

“I moved to New York City for my health. I’m paranoid, and it was the only place where my fears were justified.”

“Anytime 3 New Yorkers get into a cab together without arguing, a bank robbery has just taken place.”

Did you hear that NYC paid Hillary Clinton $2 million as a consultant for New Year’s Eve? They wanted an expert on dropping the ball at the last second.

“New York is an exciting town where something is happening all the time — mostly, unsolved.”

There is no “FAIL” – it stands for First Attempt In Learning…

The underside of New York