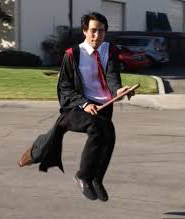 In the traffic-choked streets of Brazil’s megalopolis Sao Paulo, Vinícius Sanctus and Alessandro Russo were “flying” down the city’s main thoroughfares on a pair of broomsticks, each one attached to a single motorized wheel. In motion, the contraptions look uncannily like the brooms used by witches and wizards in the Harry Potter universe. “Actually, I tell my friends that now I only go to the bakery using my broom. But it’s not a joke. I actually do that,” said Russo. The brooms that can reach a top speeds of 37 miles per hour are useful for day-to-day urban living, they say. The duo has plans to market and sell the broomsticks, which cost about $740 each.

I think Harry Potter would fit in well working at the post office…
Apparently he’s got the rare gift of being able to speak Parceltongue.

Hagrid: “You’re a unit of power, Harry.”
Harry: “I’m a watt?”
What is Harry Potter’s favorite way of going down a hill?
J.k. Rowling

You know those brooms they ride around on in Harry Potter? How much do they cost?
About a quid each…

I used to be jealous of Harry Potter for being able to talk to snakes.
But it turns out, I’ve been doing it for years.

Harry Potter rides near you