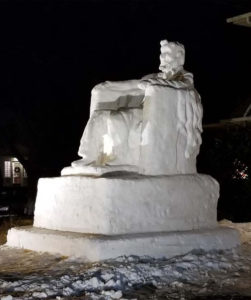 Robert Schott has built epic snow sculptures on the front lawn of his Cranford, NJ home for years, and a perfect storm made it possible for him to create a 14-foot Abraham Lincoln just in time for Presidents Day. With a little help from two plywood tiers, Schott constructed a remarkable rendition of the Lincoln Memorial. At 14-feet high, the Lincoln homage is the largest snow sculpture Schott’s ever made. The task took about 60 hours total, between Schott and a 10-person crew. The mission began on Jan. 31 as snow began to fall, with the deployment of an 8-by-8-by-4-foot plywood form, to catch the flurries and contain snow shot from a snow blower. “I’d climb up the ladder, plop the snow on the pile, climb down the ladder, go get another shovel full, do that about 100 times,” he laughed. “It’s a lot of steps!”

What was the snowman doing with his hand in a bag of carrots?
He was picking his nose.

What is a winter sculpture of batman made from?
Just-ice

Actually all this snow is not that bad. Today I can say that my lawn looks just as good as my neighbor’s.

What do you call a snowman without a carrot?
Nobody nose.

Yesterday is not ours to recover, but tomorrow is ours to win or lose.