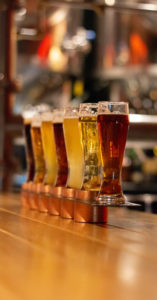 Del Hall from Cincinnati Ohio has again pledged to give up food for Lent and will only drink liquids and will mostly subsist on beer. This is the third year that he undertakes his unique Lenten fast. “Just like the monks used to do it back in the 1600s, I’m doing the same thing,” he said. Indeed, late medieval and early Renaissance monks used to brew a special bock beer that provided most, if not all, of their calories during Lent. In addition to upholding ancient traditions, Hall says his beer fast is about challenging himself. The 46-year-old isn’t constantly cracking open cold ones. Lent is about moderation. “It’s not like I’m drinking constantly. I only have three to five beers a day.” Hall loses a lot of weight during his fast. He said that every year, he’s lost somewhere between 40 and 50 pounds. Hall does have one more reason to subsist on beer in addition to observing Lent and challenging himself. He wants to raise funds for the bars, breweries, and restaurants that are struggling due to the coronavirus pandemic.

Spilling a beer is the adult equivalent of losing a balloon.

Beer doesn’t make you fat, it makes you lean… against walls, tables and chairs.

Beer is just like the sun’s journey.
It rises in the yeast, and sets in the waist.

“I am a firm believer in the people. If given the truth, they can be depended upon to meet any national crisis. The great point is to bring them the real facts, and beer.” ― Abraham Lincoln

Abstinence for a cause