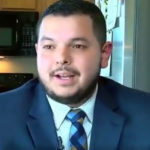 Tomas Valerio said his daughter used to love school, but after they moved to Spring Hill, FL that all changed. “After the first day, my daughter came home crying. We got her to tell us why and she said the teacher was mean and was very loud,” Tomas said. Valerio and his wife went to the principal at Pine Grove Elementary who they say explained the teacher, who has been with the district for 13 years, was naturally loud and their daughter needed time to adjust. “Weeks and weeks passed and it was the same,” Valerio said. “Every day was the same, she came home crying. Every morning, she would cry that she had to go to school.” So the parents put a recorder in the girl’s hair at school and the evidence was plain to hear. The school refused to listen to the recording and then school board only gave the teacher a reprimand after hearing the tape highlights at a public-school board meeting. The local media shared some of the tape and a protest was held outside the school and 2000 people signed a petition to ax the teacher, to no avail. The teacher’s union won out for this year, but it is exciting to have parents that pay attention and are willing to get involved. “You just don’t treat children like that, if this is the way you feel and how you have to act, this is not the job for you,” Valerio said.

A police officer came to my house and asked me where I was between 5 and 6.
He seemed irritated when I answered “kindergarten!”

My son in kindergarten had a party a short while ago where we had to dress up as food. Everyone was supposed to dress up as a food and parents were also encouraged to come and dress up. So I decided to go with my son and I put on my cowboy outfit and I went. There as I was going in a teacher said “Sir, you are supposed to be dressed as a food.” And so I said, “I am. I’m ranch dressing.”

It is better to light a candle than to curse the darkness.

If no one speaks, does it matter?