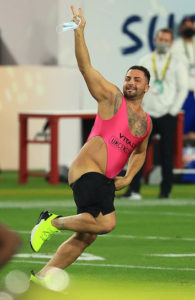 Some people complained the second half of the SuperBowl was boring. Yuri Andrade, 31, decided to liven up the affair, he ran onto the field in the fourth quarter wearing what appeared to be a women’s hot pink bathing suit then began to disrobe in stride. Running from the 40 he wisely slid at the 3-yard line. He got another ovation as he exited the stadium. Even though the event missed Budweiser and Coke commercials they got another hit from Vitaly Zdorovetskiy who hired the streaker and runs the porn website Vitaly Uncensored. Yuri has run onto the field during World Series and World Cup games and been arrested several times, including for climbing the Hollywood sign. Vitaly has been behind other sports streakings before, including one during a Champions League Finals game … which featured a woman.  Zdorovetskiy tweeted his streaker, “got more yards than the Chiefs.”

”It’s just too hot to wear clothes today,” said Jack as he stepped out of the shower. “Honey, what do you think the neighbors would think if I mowed the lawn like this?” The wife replied, “Probably that I married you for your money.”

The marriage ceremony was being held at the nudist colony. The minister asked the bride, “Do you take this man? The bride-to-be said, “Well, if I had a choice, there’s a guy in the second row…” 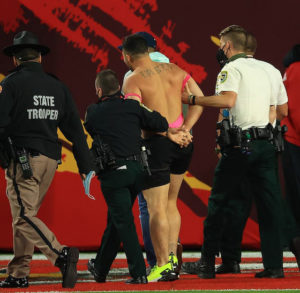 If your ship doesn’t come in, swim out to it.

The “spontaneous crazy” was a commercial