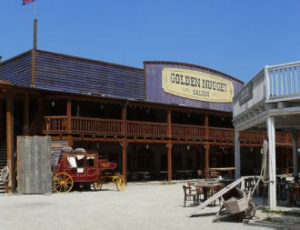 Have you imagined yourself as the Marlboro Man or the heroine in Little House on the Prairie? Here is your big chance! You can buy a complete western town to star in your own movies. The town features ten period-appropriate buildings, such as a hotel, one private residence, two rental homes that can house up to 22 people, a courthouse that doubles as a movie theater, a sheriff’s office and a fully licensed saloon. For the meager price of $7.5 million you could become the owner of Mellonsfolly Ranch, a Wild West resort town that recently went up for sale in New Zealand. the resort hosts a burgeoning Manuka honey business that in 2019 produced 15.5 tons of honey. Doesn’t sound like a bad deal at all. The concept is the brainchild of cowboy enthusiast John Bedogni, who built it as a tribute to a 1860s Wyoming frontier town. A Wild west Fantasy Island

Lots of violence could have been prevented in the old west
If only cowboy architects had made the towns big enough for everyone.

There are 3 cowboys riding through the desert
They look up and see a tree… and it’s covered with bacon.
One cowboy says, “Hallelujah! We’re saved!” And starts running to the tree.
Out of nowhere, there’s a symphony of gunshots and the cowboy is dead.
The two other cowboys scream. One says to the others, “Run! It’s not a bacon tree, it’s a Hambush!!”

A smile improves your face value