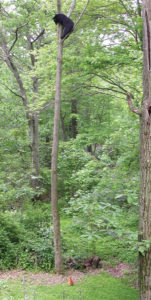 Jack the cat liked to keep a close watch on his territory and often chased small animals out of the yard, but this one was a first. Jack, a 15-pound cat was not at all happy when a black bear wandered into his backyard in West Milford, N.J. The clawless tabby confronted the bear and sent it scrambling up a neighbor’s tree. Jack hissed at the base of the tree and kept the bear trapped there for about 15 minutes. Then, when the bear tried to get away, Jack chased it up another tree. The bear was first spotted in the tree by neighbors who thought the 15lb cat was just looking up at it. They then realized the bear was afraid of the cat. “We used to joke, ‘Jack’s on duty’, never knowing he’d go after a bear. He doesn’t want anybody in his yard,” Donna Dickey added. The terrified bear was only able to make its escape when owner Donna called the hissing cat into the house. Bear sightings are not unusual in the area of West Milford in New Jersey.

What do you call a bear with no teeth?
A gummy bear!

Besides eating honey… what do John the Baptist, Smokey the Bear, and Winnie the Pooh have in common?
They share the same middle name.

Q: What do you get when you cross a polar bear with a seal?
A: A polar bear.

What’s the dumbest animal in the jungle?
A polar bear. 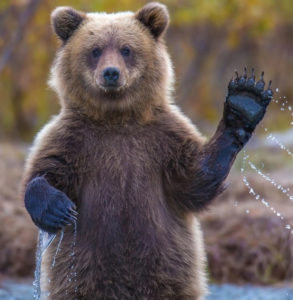 May I always be the person my dog thinks I am and convince the cat.

It is not the fear in the bear, it is the fight in the cat