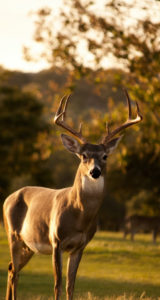 Jennifer Brady, owner of JB’s Barber Shop in Downingtown, Pennsylvania got a big surprise when she went to work in her barbershop/salon Wednesday. The front window was broken out. Then when she opened the front door the buck deer that had broken in saw her and went wild. The deer eventually jumped back out through the broken front window and ran down the street. Jennifer had to hire an emergency cleaning crew to re-sanitize the whole store as the deer had been trying to break out through the mirrors at each hair cutting station. “It was like a six-point buck. I’m staring at it. I was like, I can’t believe this right now. And then the thing started going crazy jumping up on the stations.” The shop re-opened Thursday with a promotion inspired by the deer’s visit: “In light of what happened, JB’s will be offering a couple BUCKS off. Bring in a valid hunting license and receive $2 off until the end of hunting season.”

On the first day of the deer hunting season, a hunter fell out of a deer stand and broke both his legs. “Why couldn’t this happen on my last day of hunting?!” the hunter cried to the doctor. “It did,” the doctor replied.

A deer hunter was bragging about the biggest, baddest, handsomest, heaviest deer he’d bagged the day before. “It’s got enough meat to eat the whole year,” he boasted. Just then the Game Warden came up and cited the man $500 for hunting without the proper tag. “Five-hundred dollars?” exclaimed the hunter. “All for a mangy, skinny, stubby, half-pint deer?”

“Which of Santa’s reindeer has cleanest antlers?” “Comet.”

It is not easy to find happiness in ourselves, and it is not possible to find it elsewhere.