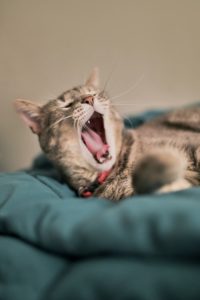 We the people aren’t the only creatures suffering from being cooped up within our own four walls. Apparently, it’s also causing stress to our pets — particularly cats. It’s common knowledge that cats aren’t as sociable as, say, dogs. Sure, your kitty loves cuddles and pets, but cats also need plenty of time to spend in their own regal company. But thanks to COVID-19, we’re now spending most of our time at home, apparently, that’s ruining cat’s lives. According to UK Cats Protection, vets are reporting rising numbers of blocked bladders in male cats and cystitis in female cats. These are potentially life-threatening conditions, and they both can be caused by stress. “It would appear that some cats may have become more stressed in their home during the pandemic,” a Cats Protection spokeswoman. “Changes to a cat’s routine always have the potential to cause stress, as they are creatures of habit.” And established routines were one of the first things to go out the window when the pandemic hit. If you suspect your cat is stressed, there are steps you can take to help your kitty feel better. The first and most obvious is leaving your cat alone. And finally, make sure your cat has plenty of water, food, and toys to keep itself entertained and fed. Just like you, your kitty will be much more disagreeable when it’s hangry or bored out of its skull.

During lockdown, middle aged women are adopting cats at a rapid rate.
It’s called the manypaws.

80% of Swedish nationals report enjoying the lockdown despite having initially rejecting it. They say it makes them more productive.
Personally, I think it’s just a case of Stuckhome syndrome.

New lockdown rules in England mean from Monday groups of up to six can meet. Six of the Seven Dwarves are arranging to meet up.
One of them isn’t Happy.

During lockdown my origami skills have improved…
Tenfold

“Happiness is not something readymade. It comes from your own actions.”

I am so bored I am going to scratch a couch