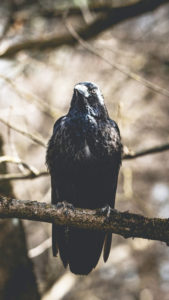 Matt Lewallen said he was packing his groceries into his car in the parking lot of an Anchorage, Alaska Costco when ravens swooped in to steal a short rib from his cart. “I literally took 10 steps away and turned around, two ravens came down and instantly grabbed one out of the package, ripped it off and flew off with it,” Matt said. He estimated the piece of meat was about 4-by-7 inches – a sizable meal for a sizable bird. “They know what they’re doing; it’s not their first time,” Lewallen said. “They’re very fat so I think they’ve got a whole system there.” Once he got back home, he noticed that the ravens had taken a poke at another rib. Kimberly Waller reported, “My parents were minding their business after shopping and made it home with one less steak! The bird snatched it right out of the pack in the parking lot.” “For years, decades, these birds watched people in parking lots of grocery stores with all this food,” the Alaska naturalist said. This is just the circle of life.

Some jokes to crow about:

How do you get a murder of crows to stick together?
Vel-crow

Why did the police arrest the crow?
They had probable caws.

A crow got cut in half by a wind turbine.
__ow

Two crows were flying from A to B
One turns to the other and says “Just for once, couldn’t we take the scenic route?”