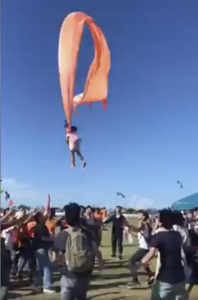 The fourth annual Hsinchu City International Kite Festival drew a good crowd. The northeastern region is famous for its high winds, perfect for kiting. One of the special kite attractions had a long, long orange streamer that was supposed to carry candy into the sky and then drop it on the crowd which included many children. Unfortunately, a 3 year old girl got caught in the long tail while the kite head was being lifted and as the tail pulled her along she clung on to it for dear life. She eventually was pulled up to a height of 100 feet until the kite operator was told the girl was hanging on the back. Video (below) shot at the scene showed her twisting several times above a crowd of adults. The crowd pulled the guide ropes down and appeared to catch her in their arms before freeing her from the kite’s fabric.

During a family visit, my 6 year-old nephew showed me his handcrafted kite.
Then I showed him my Apple watch and said “Nice kite, but look what kids in China can do at your age.”

Looking out the window, I thought the wind settled down a bit so I could go for a walk. Then a crow flew past my window…Backwards.

What do you call creepy wind chimes?
Stranger Tings

I gave my Anorexic girlfriend a kite today…
She was blown away.

Up, Up and away

Get the whole story