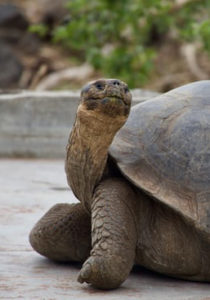 Ever had a nightmare about escaping and no matter how fast you run they are always catching up and you can never get away? That is how Solomon felt. He had been locked in the same big cage for decades and finally he saw his break. He dug a hole under the fence and broke into the woods, free as a bird. It did not last long, after 75 days on the “Run” Solomon, an African Sulcata tortoise, made it just an eighth of a mile.. His rescuers spotted the 150-pound tortoise while he grazed at a construction site near his lifelong home. His family, who owned the 15-year-old since he was just an egg, can’t figure out how he could evade capture for so long. He’s not quick on his feet, and he makes for a substantial landmark–his shell’s about three feet long. But he looks very similar to a rock.  Tortoises can live for over a hundred years. He seemed pretty content to be back with the Cole family, who presented him with a plate of watermelon-his favorite food-on his return.

A baby turtle was standing at the bottom of a large tree and with a deep sigh, started to climb. About an hour later, he reached a very high branch and walked along to the end. He turned and spread all four flippers and launched himself off the branch. On landing at the bottom in a pile of soft, dead leaves, he shook himself off, walked back to the bottom of the tree and with a sigh started to climb. About an hour later, he again reached the very high branch, walked along, turned, spread his flippers and flung himself off the branch. Again, he landed on the bottom, shook himself off, went to the bottom of the tree, sighed and started climbing. Watching these proceedings from the end of the branch were two little birds. Mommy bird turned to Daddy bird and said, “Don’t you think it’s time we told him he was adopted?”

I’ve yet to see a mutant ninja turtle live past their teens.

Mom never let us watch Ninja Turtles because we lived by a nuclear plant and she didn’t want us to think mutation was cool.

The best and most beautiful things cannot be seen or touched. They must be felt with the heart.

Breaking out of boredom