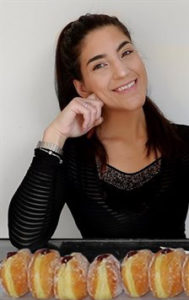 You might see Leah Shutkever as just another good looking 5ft 8in brunette. Her great figure is maintained by regular exercise and a disciplined diet program. The toned commercial designer hits the gym hard. Leah can deadlift an impressive 220 pounds and bench 132 pounds. She is known around the world not for her beauty nor her muscles nor her designs, her worldwide fame is as a competitive eater. Britain’s fittest competitive eater who can smash an impressive 12 Krispy Kremes in 72 seconds. The south Birmingham girl has represented the UK in contests, flying to New York for Japanese TV show Battle of the Big Eaters. “With competitive eating I didn’t really pursue it, it found me about four years ago and ever since then it has been one of my passions.”

What do you call a bakery that only sells bagels and donuts? Hole foods

Dunkin Donuts offers a discount to AARP members, as part of a complex right-wing conspiracy to bankrupt Medicare.
Teacher: If “can’t” is short for “cannot,” what is “don’t” short for?
Pupil: Doughnut.

The clothes make the man. Naked people have very little influence on society.

More than meets the eye