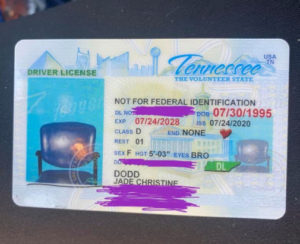 Jade Dodd renewed her driver’s and sometimes the license photos are not what you expect. She got her new license in the mail and was surprised to see the photo wasn’t a picture of her. It only showed an empty chair. “The lady at the DMV did not really believe me when I was like ‘Hey, I need my license fixed,’” Dodd said. Jade wasn’t upset by the mistake. Instead, she said it lightened the mood amidst the coronavirus lockdown and provided her and her coworkers with a few laughs. “My boss thinks it’s funnier than anyone,” Dodd added. “I was at work Friday and he pointed to a chair outside of his office door and was like, ‘I thought this was you, I waved at it this morning.’” There was also one that joked Violet from Disney Pixar’s” The Incredibles” had gotten her license because her character is able to render herself invisible in the film.

Good news, you can’t get infected if you don’t have a license
It’s only a Car-ownavirus.

Fall is the most beautiful time in Florida, really…
All the license plates start changing colors.

Today you need a driver’s license to pay cash.

License to sit and maybe stay