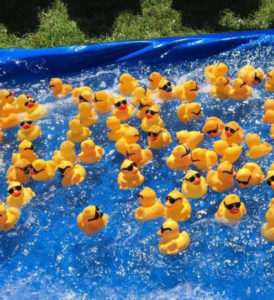 Graham, Texas has the distinction of being the little town with the biggest rubber ducky race for a town its size. In fact, this year there were more Rubber Ducks in town than residents. The second annual Graham Rotary Club Duck Derby floated 10,000 rubber ducks making their way across the duck pond. The top prizes was $5000 for the owner of the first duck to make shore at the finish line. Each duck cost $4 to $5 and was labeled with the name of the purchaser. The biggest Rubber Duck race worldwide was in London with 250,000 blue ducks. The largest race in the US was the Rubber Duck Regatta in Cincinnati, with 150,000 ducks. Today nearly every American city has a duck race as fund raisers for various charitable and non-profit organizations. Yes, in most cases you get to keep your duck after the race.

I shaved my eyebrows off for charity.
Turns out they would have preferred money.

I‘ve decided to run a marathon for charity
I didn’t want to do it at first, but apparently, it’s for blind and disabled kids so I think I’ve got a good chance of winning.

A woman approached me in the street the other day with one of those charity collection buckets and asked me: do you know how often people die from AIDS?
I said: now I’m no expert, but I think it’s only once.

I’m one of the few people willing to step into a boxing ring with Mike Tyson
Because I’m an organ donor, it’d be a charity event. 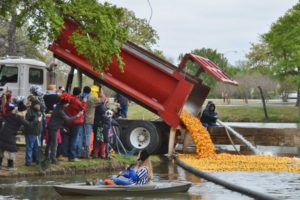 There is no way to Happiness, Happiness is the way.

One in a million Lucky Ducks

New record for a small town