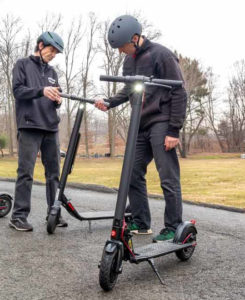 Mayor Virginia Raggi has encouraged electric mobility in the Italian capital, where buses occasionally catch fire and metro stations have been shut for months because of broken escalators. Many Romans have begun using scooters to get to work and tourists enjoy darting from the Colosseum to the Vatican. There are about 6000 electric rental scooters in use and while they fit the streets well, the residents are not all comfortable with them. The battery-operated vehicles have also caught on because Rome’s hills are too steep for most cyclists. “They violate every basic road and traffic rule,” said resident Carmen Golia. Police say they issued fines of up to $473 each to more than 150 users. Critics say this is too little. Many scooters are left near ancient monuments or blocking sidewalks, leaving some upset residents to take matters into their own hands.

Itsa funny for you

I got a “C” on my roman numerals test.
A perfect score.

A Roman soldier sits down at a bar, holds up 2 fingers to the bartender and says…
“Five beers please.”

COVID-19 is like Pasta
Asians invented it, Italians spread it.

The Iranians and Italians have jointly formed a university.
Ayatollah U

Worry is the darkroom in which “negatives” are developed.

Ima Scoota down to you