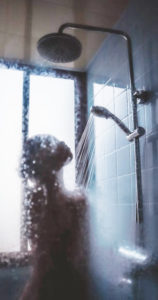 Three women in Florida decided to take advantage of a Florida highway rest stop to take a shower and “air dry.” A Florida Highway Patrol officer who responded to the call said that when she questioned the naked suspects, the three women said they had been staying at a relative’s house, but left after an argument. Having nowhere else to shower, they said they used soap and water to bathe on the grass outside the rest stop building. The women did get dressed, but then drove away before the questioning had finished. Troopers tracked down the vehicle to a convenience store. One trooper tried to arrest one of the women when she left the store, but her colleague appeared to purposely drive the car at the officer. At the same time, another woman tried to hit the officer with a pink baseball bat. Police eventually stopped the car using spike strips. The women were taken to the Pasco County Jail

My husband called and asked if I could be naked before he gets home from work…
…I feel awkward sitting here with his mother, but whatever.

A naked woman robbed a bank
Nobody could remember her face

To bear defeat with dignity, to accept criticism with poise, to receive honors with humility — these are marks of maturity

Florida leads the country in…