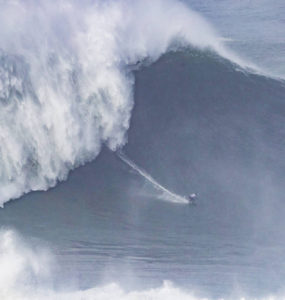 Maya Gabeira caught her big wave at the world surfing contest in Portugal. The same competition where she previously set the record for largest wave surfed by a female. This year’s wave was 73.5 feet tall, higher than the highest point of the White House. The World Surf League announced Gabeira won the Biggest Wave Award and the Red Bull Big Wave Award. She remembered thinking at the time there was something different about that wave. “I remember riding in and out of that wave and going back outside and being like, ‘OK, that’s a no repeat,” she said. “I think the most impressive thing for me was the noise. I was very close to this explosion. That’s a once-in-a-lifetime experience. I’ll take that, but I’m not going there again. That was too close. It felt quite scary.”

My teenage son was in a big hurry to try out his new surfboard so much so that Ignoring the warning flags he went straight out into the waves. however, he stopped immediately when an authoritative voice boomed into the sure “you are an inexperienced surfer, return to shore. Shamefaced, he did as he was told and asked the lifeguard how he knew he was a novice. “Easy,” the lifeguard said. “You’ve got your wetsuit on backward.”

Surfing is a form of torture
Because technically it’s water boarding.

I love Florida. I love the beach. I love the sound of the crashing surfers against the rocks.

What’s the weird fleshy thing between a sharks teeth called?
A surfer

The only thing that stops us from getting what we want is the story we have about why we can’t have it.

The bigger they are, the better the ride