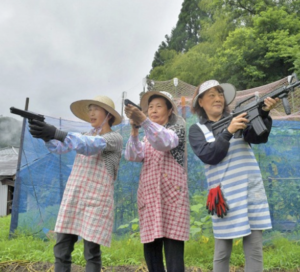 This trio of primate-busting lady retirees made national headlines last week, after their gang that saved crops from monkey damage was revealed by local newspaper Fukui Shimbun. The three women formed the “Monkey Busters” group in May, after attending a class. The monkeys, have been damaging onion, eggplant, soybean and potato crops in the area since 2015. With scarecrows and anti-animal netting proving to be ineffective at protecting the valuable crops, the three women decided to take matters into their own hands. As soon as a sighting is reported, the Monkey Busters immediately drop everything to rush to the scene with their airguns, often arriving in their aprons.

We all heard that saying where if a million monkey banging on a million typewriter will eventually reproduce the entire works of Shakespeare.
Now thanks to the internet we know it’s not true.

My wife asked me to stop singing “I’m a Believer” by The Monkeys. At first I thought she was kidding. But then I saw her face…

Did you hear about the monkeys who shared an Amazon account?
They were prime mates

It’s interesting to think about the way the Japanese think of us as just the place where the Toyotas go.

If you want to test your memory, try to recall what you were worrying about one year ago today.