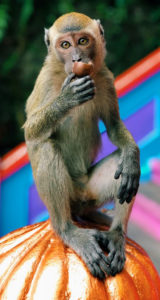 Zackrydz Rodzi, a student said he went to sleep with the phone beside his bed on Friday night, but woke up on Saturday to find it missing. No one in the family had taken his phone. There was no sign of a robbery and that after a spending a day looking for the device, he was still unable to find it. On Sunday, his father mentioned that he had seen a monkey around the house overnight Friday and suggested “Z” check the jungle behind the house. In the back yard, he dialed his phone and heard it ringing, it was in the backyard under a tree. The family now suspects the monkey entered through his brother’s open window and took the phone. Z cleaned up the phone and looked at the photo section it was full of monkey photos. Most of the images were grainy, blurry or out of focus, but a couple of shots show the monkey’s face as it fumbles with the phone, before it abandoned the device in the jungle.

Left my phone under my pillow last night and when I woke up it was gone and there was a $20 bill there. I think it was the Bluetooth fairy.

If your Cell Phone is water damaged, try submerging it in rice overnight.
This should attract Asians, who will fix it.

I forgot my cell phone when I went to the toilet yesterday. We have 245 tiles.

I hate monkey bars
They only have banana daiquiris

Both bread and meat were on this planet for 43 centuries before someone decided to make a sandwich.