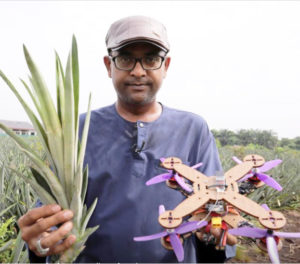 Professor Mohamed Thariq Hameed Sultan at Malaysia’s Putra University, has been trying to find sustainable uses for pineapple plant waste generated by farmers. “We are transforming the leaf of the pineapple into a fiber that can be used for aerospace application, basically inventing a drone.” Mohamed said drones made out of the bio-composite material had a higher strength-to-weight ratio than those made from synthetic fibers, and were also cheaper, lighter and easier to dispose of. If the drone was damaged, the frame could be buried in the ground and would degrade within two weeks, he said. His prototype drones have been able to fly up to 3000 feet and can stay in the air for about 20 minutes. Their plan is to create larger drones to accommodate bigger payloads, including imagery sensors, for agricultural purposes and aerial inspections. It is hoped that the project will boost revenues for pineapple farmers in the country, who previously discarded the stems and leaves of the annual fruit after harvest.

Amazon says drones will be making deliveries in ‘months,’
So much for “next day” delivery

Getting my drone stuck in a tree isn’t the worst thing that happened to me today.
But it is definitely up there.

I got a new job at Gatwick Airport. I patrol the runways on a horseback carrying a shotgun and shoot down any illegal flying devices in the area.
I’m known as The Drone Ranger.