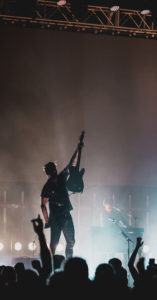 It was the story of the summer in Germany: Allegedly two senior citizens confined to an old age home sneaked out and went to the Wacken Open Air heavy metal festival. Media in the US and Germany carried the story…As you may have guessed, some creative type had made the story a lot sexier than it really was. The two men, really in their late 50’s, were in a low security mental facility. They really left for Wachen to get drunk again. They never really made it to the concert, but they were able to get thoroughly inebriated. After the facility alerted police about the missing inmates, the pair was found incapacitated and uncooperative at a roadside bus shelter, probably unable to make the bus back home. Police did take them to the medical tent set up for the concert to get checked out and then sent them home in a taxi. So…Was it an ambitious reporter or a creative concert promoter that spread the story?

Trump claims if he could walk on water, the fake news media would report:
“Trump can’t swim”

I asked my father for permission, to go on a 50 Cent concert.
He handed me a dollar and told me to take my brother with me.

Studies show liberals are less susceptible to “Fake News”
I read it on Facebook.

I went to a concert to feel better today…
I thought it was The Cure, but it turned out to be just Placebo.

The best way to predict your future, is to create it!

It must be true, I saw it on the internet…