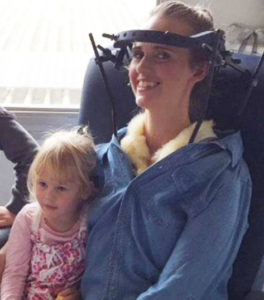 Monique Jeffrey was lying in bed checking emails on her phone early one morning when she suddenly sneezed and her neck jolted forward. As she sneezed, her vertebrae collapsed and her chin fell onto her shoulder, leaving her hunched over in agonizing pain. With her husband at work and her newborn baby asleep in the next room, Jeffrey soon realized she couldn’t move her neck. She began to panic. “He came home and called an ambulance. She was placed in a neck traction for 14 weeks and made a full recovery. But just three weeks ago, she injured her neck again. “We were just making some jokes and whatnot about my neck because it’s pretty funny about it happening the first time. And I kind of threw my head back in laughter my chin was pulled across to the right, so they called an ambulance and now I’m in a neck halo.” The device screws into the skull and stops the wearer from moving their head. “I’ve had two kids and getting the halo is worse than childbirth.” Jeffrey has to wear the device for six weeks. “It’s not terminal, I’m going to be fine, but it does suck a bit. You just have to laugh about it.”

Laugh at your own risk

My wife and I share the same sense of humor.
We have to because she doesn’t have one.

I was stepping out of the shower and my four-year-old daughter burst through the bathroom door. “Excuse me.” I said. “I am naked.” She responded, “Don’t worry, I won’t laugh at you.”

I asked my son if I could have the phone book. He laughed, shook his head: “You’re so last century!”, and handed me his cell phone. Long story short: the spider is now dead, son’s phone is smashed and son is not laughing.

Two wives were comparing notes. One said, “My husband talks in his sleep, does yours?”
“No, his habit is worse, he just chuckles.”

Gracefulness has been defined to be the outward expression of the inward harmony of the soul.

Getting a Halo in life