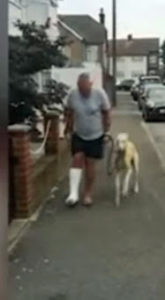 Russell Jones of London, England broke his ankle and after he came home with a cast on the leg, he still took his dog for a twice daily walks. He noticed as they walked together that his dog, Billy, was keeping one of his front paws raised while walking. Russell posted a video showing the dog hopping next to him as he walked with the use of crutches. Billy’s limp never healed so Russell spent $400 to have a vet examine the dog and X-ray Billie’s foot and shoulder. The Doc was unable to find anything wrong. The veterinarian told Jones he thought his dog Billie was imitating the way Russell walked with his broken ankle. Russell said Billie had been limping since the day after his ankle injury. However, he was overwhelmed to find out the heartwarming reason behind the limp. He soon discovered his golden-coated pup was just imitating his own injured walk out of sympathy. Russell took to social media to share heartwarming footage of his dog’s hilarious behavior.

Two blondes speaking:
My boyfriend is a veterinarian.
– Oh, did he fight in a war?
– No, dummy, he doesn’t eat meat.

Signs of Veterinary humor:
Cat puns freak meowt, I’m not kitten.
Never feed your cat anything that clashes with your carpet.

Sign at Highland Road Animal Hospital:
Dinosaurs never went to the vet, Look what happened.
My alarm does have a snooze button, it has paws.

EauGalllie Vet clinic sign:
Unattended children will be given an expresso and a free puppy.

“Both bread and meat were on this planet for 43 centuries before someone decided to make a sandwich.”

When your closest friend is a dog