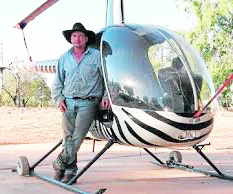 In North Queensland, Australia the land is so vast that you do not spend much time on horseback chasing cows. The livestock run loose and most of the herding is done by helicopter. So when it comes time for health checks or culling the herd the helicopters come swooping in to scare the cows into groups and back toward the farm buildings. Brendan Grainger gave this account of a conflict between a helicopter and an ornery bull on the range. As the pilot was buzzing around one bull would not move. So the helicopter buzzed in lower and tried to push the big guy with the larger group. This cow was not going to move and when the helicopter came in low repeatedly instead of turning away the bull ran at the little bird. They assume the cow’s horns got tangled in the landing skids of the helicopter and when the pilot tried to go up again he could not because he had a cow attached underneath. He tried to quickly shake the animal loose, in the struggle the rotors hit the ground and the plane crashed. Fortunately, the bull got loose from the runners and the pilot was able to get out of the craft, but the chopper was udderly destroyed.

There are 5 flies in a kitchen. Which one is the cowboy?
It’s the one on the range.

When I was a kid, we always played cowboys and Indians, and I was always an Indian. Today I have my own casino.

What is another name for a cowboy?
Hamburger helper.

How do German Cowboys greet each other?
Audi.