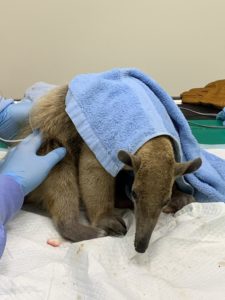 Taipei Zoo officials were overjoyed yesterday after a mother anteater that had escaped more than three months ago was found on Sunday by two hikers. The mother anteater was in the zoo’s Tropical Rainforest section. They were afraid she would not survive in the wild. She was found about 4km from the zoo and still managed to find food and avoid being attacked. After escaping from her enclosure on Sept. 1, the zoo posted notices and pictures on social media. After three months with no news of Hsiao Hung, zoo staffers thought there was little chance she would have survived. Two hikers saw a strange animal and took photographs of it. Officials immediately gathered a rescue team of 36, including zoo staff, animal rescue specialists and local residents familiar with the mountain trails. After searching for more than an hour, they found her sleeping inside the hollow of a tree.

What do you call a zoo where all the giraffes have covid?
Giraffe Sick Park

I went to the zoo and saw an antelope.
I had never seen an insect get married before.

I went to the zoo yesterday and saw a baguette in a cage.
The zookeeper said it was bread in captivity.

“What the mind can conceive and believe, it will achieve.”