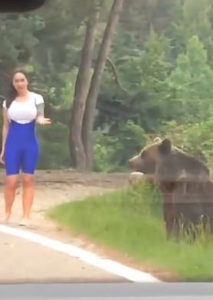 Romania has more brown bears than any other place in Europe. The irony is that everywhere else brown bears have been hunted to near extinction and are now a protected species. Romanians have bears particularly around farms and places where the bears can get human food. The government has warned people not to go near bears or even to put food where bears can reach it. A woman tourist who almost became bear food. Apparently, she and her boyfriend thought she would be cute in a picture standing next to a bear that was waiting on the side of the road, probably for snacks to be thrown by passing motorists. She got out of her car and walked cautiously over to the sitting bear as her partner lines up the shot. A driver behind them, sees the potential disaster unfolding and of course decided to video it on his cell phone. The bear lunged at her when she got too close and she sprang away and ran to her car. Apparently, the bear really wanted munchies from the drivers more than chasing the foolish girl.

With the lack of tourists during the pandemic, I’m surprised the tower of Pisa hasn’t fallen over… Without all those tourists helping hold it up.

Tourist, one who travels to see things that are different and then complains when they aren’t the same as at home.

An American staying at hotel in London was introduced to a man from Edinburgh who asked him, “An what country do you belong tae?”
The American replied “the greatest country in the world.” The response came,” Man so dae I, but you dinna speak like a Scotsman.”

Why did the Romanian stop reading?
They wanted to give the Bucharest.