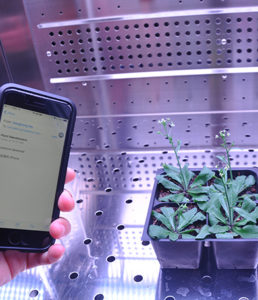 Researchers from MIT and the University of California, Riverside, have found a way to use your vegetables to detect terrorists and communicate with homeland security. This goes beyond simple cameras and social media monitoring. By embedding tiny sensors made of carbon nanotubes into spinach leaves they could detect nitroaromatic compounds, often found in explosives. Once the roots came into contact with these compounds, the sensors in the leaves issue a fluorescent signal that was detected by an infrared camera attached to a small computer that sent researchers an email alert. “Plants are very good analytical chemists. They have an extensive root network in the soil, are constantly sampling groundwater, and have a way to self-power the transport of that water up into the leaves. This is a novel demonstration of how we have overcome the plant/human communication barrier.” Scientists now believe that the nanotech could be stretched to engineer plants to warn researchers about pollution and other potential environmental issues. Potentially warning of people that do not eat their vegetables.

Q: Where did the spinach go to have a few drinks?
A: The Salad Bar!

If vegetables like spinach are so good on their own…
Why do vegans keep trying to make them taste like meat?

Why does Popeye eat so much spinach?
Because it goes great with Olive Oyl.

I get a lot of solicitors at my house, salespeople, charity seekers, Jehovah’s Witnesses, I’ve seen them all. But today I got someone at my door asking if I eat enough vegetables.
I wasn’t expecting some sort of spinach inquisition!

Worry is the darkroom in which “negatives” are developed.

Be careful, the potatoes have eyes,  the corn has ears and…

Your spinach is emailing