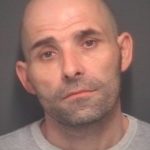 Stuart Campbell, 42, only had one skill, one plan and one bad habit. His skill was burglary and his habit was cocaine. Actually, this is a pretty popular combination. What makes Stuart famous is not the hundreds of homes he stole from, but his performance after he was released from prison. His plan was to get parole after 3 years in prison,  as a condition of his parole he agreed to wear an ankle monitor. Stuart had committed more than 200 burglaries in the past, and had even been nicknamed ‘The Creeper’ by police, thanks to his skill at stealing items from bedrooms as the occupants slept just inches away. ‘The night after the tracker was fitted in June this year, Mr. Campbell committed five burglaries in a residential area of Waterlooville. Campbell then cut the tracker off his leg. Campbell, a heroin and cocaine addict, was jailed for five years in 2005 for 126 burglaries, but within three years was out and being convicted for burgling another 80 houses. His time out of jail would have been longer if his plan had eliminated the ankle monitor sooner.

If 2020 is not bad enough already, I’ve just read about dentists planning a national strike next month: Brace yourselves.

Vladimir Putin has boasted that Russia is planning to build a base on the moon. The idea is that astronauts will live there permanently. When they were asked if they really wanted to spend the rest of their lives in a barren, lifeless, empty landscape, the Russians said…
“No. That’s why we want to go to the moon.”

Back when the pandemic first hit, I had to tell my suitcase that my travel plans were cancelled. Since then, I’ve constantly had to deal with emotional baggage.

Did you hear they are planning on releasing the Covid vaccine in coffee pod format?
They’re calling it the Cure-ig

Three crows planned a meeting and only two of them showed up
They were charged for an attempted murder (of crows).

The world belongs to optimists. Pessimists are only the spectators.