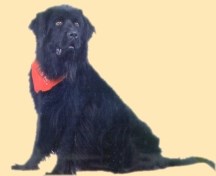 Seaman was Meriwether Lewis’ dog and the only animal to complete the entire trip. The Black Newfoundland was invaluable as a hunter and a protector. Seaman was even stolen at one point during the trip, but returned later. We can imagine him riding in the boats or trotting along the shore and hunting with the men as they moved along on their journey from St. Louis to the Pacific Ocean. Seaman even did his own hunting along the way on land and swimming back and forth to the boat with captured squirrels. One of the Shawnees, offered Lewis three beaver skins for his dog. Seaman chased and on one occasion, caught a pronghorn antelope. Seaman was a great watchdog as well. One night a curious Buffalo came into the sleeping camp and Seaman chased him away from the people repeatedly until the buffalo gave up and went back into the river. Seaman even served as an “ambassador” of sorts with Indian nations, like the Shoshone. Both men and dog were plagued at some stages of the trip by burrs and prickly pear cactus that would puncture their moccasins and the dogs feet. Recently discovered information indicates that Seaman survived the trip and returned to St. Louis with Lewis and Clark.

A tourist was amazed to watch the village man entertain with his dog doing tricks. He asked the back woodsman, “How do you manage training your dog that way? I can’t teach my dog a single trick.” The villager ponders a moment and then gave a simple rustic reply, “Well, you see, it is this way. You have to know more than the dog or you can’t learn him nothing.”

A kennel advertised a talking dog for sale for $25. A man did not believe it, but came to check it out. He buyer said, “Who are you kidding with this talking dog thing. What is the catch?” At that point, the sad dog looked up at the buyer and explained. “Please rescue me for only $25 bucks. This owner is mean to me and never feeds me or walks me. I have not been to the vet in years. I was once the fastest rising trick dog in the circus and I served in the army and got three ribbons in Desert storm.” The buyer was aghast he said, “this dog really does talk. Why are you selling him for only $25?” The owner explained, “I cannot stand his lies.”

My aunt’s friend told her about a conversation she had overheard between a couple at the grocery store. Apparently, they were taking a trip with their dog and were looking at pet supplies to bring along. After scrutinizing some canned food, the wife said to her husband, “Let’s not take the dog this time.” The husband snapped back, “We can’t do that, I already told him he could go.”

Q: What do you get when you cross a dog and a calculator?
A: A friend you can count on.

Give everything and have no regrets. Life is too short to be anything but happy.