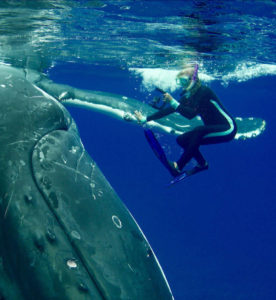 Marine biologist Nan Hauser was interacting with a 50,000 pound humpback whale during a snorkeling dive off Muri Beach in Rarotonga, Cook Islands in October. The whale can be seen in the pictures below tucking her underneath its pectoral fin. “I’ve spent 28 years underwater with whales and have never had a whale so tactile and so insistent on putting me on his head, or belly, or back, or, most of all, trying to tuck me under his huge pectoral fin.” Hauser was pushed around by the whale for nearly 10 minutes, The whale even lifts Hauser out of the water at one point. It went from fun to concerning because one fin flick could break her bones. Unknown to Hauser, a tiger shark was in the water nearby. Once Hauser spotted the shark, she realized what the whale was doing and tried to stay calm to not startle the whale. As Hauser returned to the safety of her research boat, she informed her team of the shark and the whale surfaced again to check on her. This footage is the first known video of a humpback whale protecting a human from a tiger shark.

A whale of a tale

Why are Killer Whales smarter than humans?
Because within 3 hours they can train a human to stand at the side of a pool and feed them fish!

What’s the best thing to do with a blue whale?
Cheer it up.

My wife has a whale tattooed on her belly.
It used to be a dolphin.

What do you call a crew hunting for sperm whales?
Seamen of course

You are not old until regrets take the place of dreams.

A prince of Whales