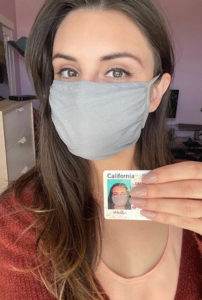 Leslie Pilgrim needed to renew her driver’s license and went to visited her local DMV. Being an obedient California citizen she wore her mask all the time she was in the building. After paying her fee and filling out the paperwork she sat down to get her new picture taken. A quick flash and she was immortalized. When the clerk looked up, she realized that Leslie had left her mask on as the governor demanded. The clerk told her to take off the mask and shot another picture. Several days later, Leslie was mailed her driver’s license. She was impressed how good she looked with only half of her face showing. There was $35 wasted. “I was raised to see the humor in everything, so to me, at the end of the day, this is funny,” Pilgrim told FOX 11. Allegedly: “This is the only instance of a license photo with a face mask reported to the DMV by a customer.” Illegal aliens have been inquiring.

A kid has just got his driver’s license, and to celebrate his freedom he offers to go get groceries for his mother…”Okay,” his mother says, “Get a gallon of milk. And if they have avocados, get 6.” The boy returns 30 minutes later with his arms full.
“Why’d you get so much milk?” the mom asked. “They had avocados.”

A policeman stopped me today and asked for my license.
He said: “It says here that you should be wearing glasses.”
I said: “Well, I have contacts.”
The policeman replied “I don’t care who you know! You’re getting a ticket!”

I just bought the personalized license plate “BAA BAA”…
For my black jeep.

They can because they think they can.