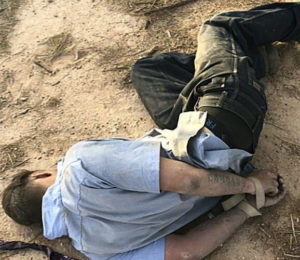 Brandon Soules, a 19-year-old man from Arizona, was found in the dirt on the roadside gagged with hands tied and pants at half mast. Mr. Soules said that two masked men kidnapped him, hit his head, knocking him unconscious, and drove him around in a vehicle before they left him in the area he was found. He claimed he was targeted because his father had a large amount of money hidden throughout the desert. An extensive investigation was conducted by Coolidge detectives who say his story was fabricated and no kidnapping or assault occurred. Mr. Soules was arrested a week later for False Reporting and officers said he admitted during an interview that he made up the story as an excuse to get out of work. It was supposed to be the perfect ruse, but it ended up with a week-long police investigation and the prospect of jail time. During his 14 months at the “The Tire Factory”, he says he collected used tires from across the state and helped to fit them to cars.

The pun of pure imagination

Did you hear that the CIA hired Stanley Kubrick to fake the Moon landings?
Kubrick was such a perfectionist, he made them film on location.

What’s the difference between Trump and a slow, phony, fake, crooked, corrupt politician?
About 4 million votes.

Fake friends suck…
You take your medication once and they leave you just like that.

There has been a lot of fake news going on about the Canadian prime minister lately.
Some of it is Trudeau.

Great people make you feel that you, too, can become great.

Do I have to go to work again?