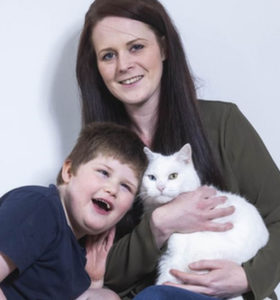 Minty, from Holywell, England, beat hundreds of other felines to win the top prize at the National Cat Awards, held by the charity “Cats Protection.” Minty was the favorite in part due to his “special bond” with six-year-old Connor, who has severe learning difficulties. “He is a huge part of our family and it is lovely to share the unique bond the boys have,” Connor’s mum, Siobhan, said “Minty demonstrates how clever, affectionate and dependable cats can be. We can always rely on him to make everything better, and he is the best friend that Connor needs and deserves. I’m over the moon that Minty has been recognized for the special cat that he is.” Connor has a range of medical conditions, including ataxic cerebral palsy. What gave Minty so much favor is the cat’s own story: In spite of losing leg after being hit by a car, Minty fits in the house and somehow shares his sense of compassion with Connor. Despite his missing leg, Minty has helped Connor learn to climb the stairs, keeps him settled at meal times and provides a calming presence at bedtime. “Together, they are unstoppable, whatever comes their way. Minty’s a really inspirational cat and we love him to bits.”

One time my friend said to treat him like a god…
So now I only talk to him when I need a favor.

I’m a tall guy whenever I’m in the supermarket, people ask me to get things off the top shelf for them. I don’t mind, but it’s not like I can drop something on the floor and ask a short person to get it for me. I can’t go, “Hey, can you get it for me. You’re closer to the ground.”

87% of Russians favor Vladimir Putin
The other 13% are still missing.