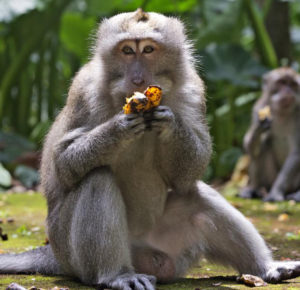 The Sangeh Monkey Forest typically had about 6,000 visitors a month, but as the pandemic spread last year and international travel dropped off dramatically, that number dropped to about 500. Since July, then Indonesia banned all foreign travelers to the island and shut the Buddhist shrine off to local residents as well. Not only has that meant no extra food for the monkeys, without admission fees the sanctuary is running low on money to purchase food for them, said operations manager Made Mohon. The donations from villagers have helped, but they are also feeling the economic pinch. Food costs run about $80 a day for 200 kilograms of cassava (like oriental potatoes) and 22 pounds of bananas. The macaque can eat a variety of animals and plants found in the jungle, but these have so much contact with humans over the years that they seem to prefer other things. And they’re not afraid to take matters into their own hands. Bored monkeys wander into the village and sit on roofs, occasionally removing tiles and dropping them to the ground to get attention so the villagers will feed them. “A few days ago I attended a traditional ceremony at a temple near the Sangeh forest,” Gustu Alit said. “When I parked my car and took out two plastic bags containing food and flowers as offerings, (at the shrine) two monkeys suddenly appeared and grabbed it all and ran into the forest very fast.” Normally, the monkeys spend all day interacting with visitors — stealing sunglasses and water bottles, pulling at clothes, jumping on shoulders — and Gustu Alit theorizes that more than just being hungry, they’re bored.

Once upon a time in a village, a man appeared and announced to the villagers that he would buy monkeys for $10 each…The villagers, seeing that there were many monkeys around, went out to the forest and started catching them.

The man bought thousands at $10 and as supply started to diminish, the villagers stopped their effort. He further announced that he would now buy at $20. This renewed the efforts of the villagers and they started catching monkeys again.

Soon the supply diminished even further and people started going back to their farms. The offer increased to $25 each and the supply of monkeys became so little that it was an effort to even see a monkey, let alone catch it!

The man now announced that he would buy monkeys at $50! However, since he had to go to the city on some business, his assistant would now buy on behalf of him.

In the absence of the man, the assistant told the villagers; “Look at all these monkeys in the big cage that the man has collected. I will sell them to you at $35 and when the man returns from the city, you can sell them to him for $50 each.”

The villagers rounded up with all their savings and bought all the monkeys. They never saw the man nor his assistant, only monkeys everywhere! Now you have a better
understanding of how the cryptocurrency market works. 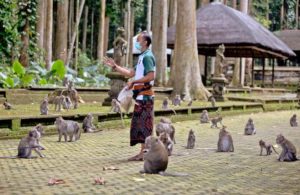 Did you hear about the monkeys who shared an Amazon account?
They were Prime mates.

What’s a good day to see tailless monkeys at the zoo?
Any gibbon day of the week.

The woods would be very silent if no birds sang there except those rated the best.

Monkey business in the age of Covid