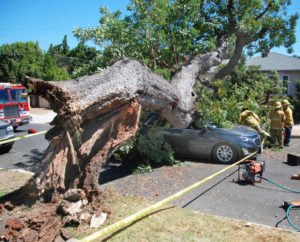 Marcia was traveling down Houston Street in her little Chevy Equinox with her Chihuahua, “Peppi” next to her. Perhaps on her way home from church about quarter to 12, Sunday morning. This morning she got another reason to be thankful for angels. One of the big, old, rotted trees on Houston street just gave up the ghost in a slight breeze and fell over exactly on top of Marcia’s car crashing through the roof right behind the windshield. The reason Marcia was not squashed like a bug from the weight of the aging tree was the tree stretched across the street and also was cushioned by two parked cars it also squashed. The car was totaled. The Houston Street neighbors jumped to help, they called 911 and got Marica and Peppi away from the tree and the car in case it would move as the branches settled. While Marcia was damaged and bloody, she was able to crawl out of the car before the fire department arrived and she and Peppi waited for the ambulance to check her out and take her to the hospital for observation. The neighbors had complained and wondered when several of the old trees in the neighborhood would fall because of their rotten condition. The neighbors said it was a miracle she was not killed. Peppi was taken care of by a neighbor who also happened to work at the hospital. “Everyone who lives here is always worried about one of these things coming down and killing them.”

When I see couple’s names carved into a tree, I don’t think it’s sweet.
I think it’s strange how many people take a knife on a date.

How do you make leaves fall off of the trees?
You don’t – they do it autumn-atically.

What is the most popular tree on YouTube?
A face plant.

Gravity gets us all in the end