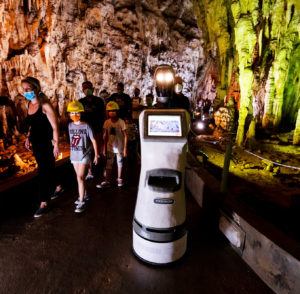 Nobody would want to go into a big cave alone, well almost nobody. But if you had a guide and clear walkways it would be a lot more comfortable. Persephone is a tour guide in Greece. Persephone the world’s first robot tour guide inside a cave has been welcoming visitors since mid-July to the Alistrati Cave. The multilingual robot covers the first roughly 500 feet of the part of the cave that is open to the public. In the remaining 2,400 feet, a human guide takes over. The robot can give its part of the tour in 33 languages and interact at a basic level with visitors in three languages. “People are enthusiastic, especially the children, and people who had visited in the past are coming back to see the robot guide. It is something unprecedented for them, to have the ability to interact with their robot by asking it questions and the robot answering them,” Nikos Kartalis said. “Many foreign visitors couldn’t believe Greece had the capacity to build a robot and use it as a guide in the cave.” Nikos, the scientific director for the Alistrati site, had the idea of creating the robot when he saw one on TV guiding visitors at an art gallery. Seventeen years later, “We got our funds and the robot guide became a reality,” Kartalis said. The robot was built by the National Technology and Research Foundation and cost $139,000.

Your guide to cave humor

Two bats were hanging upside down in a cave
The first bat asks the second, “Do you remember the worst day of your life?”
“I sure do,” said the second bat. “It was the day I had diarrhea.”

A saber-tooth tiger arrives at a cave man party
Where his friends had been partying with a bunch of cave-people.
“I see I’m too late,” says the tiger.
“Yup,” says another. “Everyone’s eaten”

What country is known for cave paintings?
Denmark

It’s better to live your own life imperfectly than to imitate someone else’s perfectly.