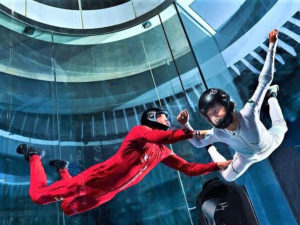 Have you ever dreamt of flying? How about skydiving? Now you can do that in a safe controlled environment. The lead company building and renting the experience of flying or skydiving is called I-Fly. The have facilities in many major cities. The gist of it is that you wear protective gear and a uniform to save you from wind damage and then step into a 180 mile per hour updraft. Like a category 5 hurricane only going up and inside a big clear plastic tube. The result you can see in the videos below, is you can float, spin, somersault and mostly control your midair suspension by the way you hold your body parts in the wind. A 13-year-old indoor skydiving enthusiast in Japan broke two Guinness World Records for spinning in the wind tunnel. Fuyuki Kono, whose passion for indoor skydiving was kindled while she was studying abroad in Australia, broke the records for the most front split spins in one minute and the most 360 horizontal spins in one minute at the indoor skydiving center in Saitama, Japan. Kono managed 78 front split spins in one minute, and 60 horizontal spins in the allotted time.

It was so windy…

A man crossing London Bridge sees a pretty woman struggling to keep her mini skirt down in the wind so he says : A bit airy isn’t it?
She replied: What the heck did you expect, feathers?

What do you call a plastic bag moving in the wind?
An American tumbleweed

Yoda use to have the younglings put on white face paint and pretend to walk against the wind, be trapped in invisible boxes, you know…
Jedi mime tricks.

Where is my parachute?