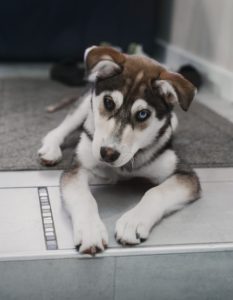 Jesse Newton went to bed one-night last week just like normal. His puppy was in bed and his 4 year old son was in bed and the doors were locked and all was at peace. About 3 am his son crawled into bed with mom and dad bringing the distinct odor of dog poop. Jesse got the boy out of bed took him to the bathroom and discovered the source of the smell. He had dog poop smeared all over his pajamas. Jesse went into the living room and saw that there was dog poop pretty evenly spread over all the living room carpet with bits on the walls and furniture. He quickly realized his Roomba robot vacuum cleaner had hit a pile dog poop and spread it all over the house including his son. So Jesse got up and tried to clean the rug and the furniture as well as his son. By 6 am it was as good as it was going to get and he went back to bed. Only to discover that his wife’s favorite rug was a total loss and he was to blame for not taking the dog outside before he went to bed. He tried to wash the Roomba in the bathtub, but forgot to take the battery out and the machine burned out in the tub. The good news is… his saga on social media got him a new free Roomba from Hammacher-Schlemmer and a free maid service cleaning and some other gifts from kindhearted readers. “The story was funny, and we laugh at it now, but I was pretty upset at the time,” Jesse said. “I was tired, and I was covered in dog poop, and I knew I had just fried our Roomba.”

If space is a vacuum…
Why is the earth so dirty?

My Roomba accidentally went out the front door, and the neighborhood animals immediately started attacking it.
Nature abhors a vacuum.

What is a time travelling vacuum cleaner called?
Dr. Whoover.

Did you hear about the Buddhist vacuum cleaner?
It has no attachments.

Education is the most powerful weapon which you can use to change the world.