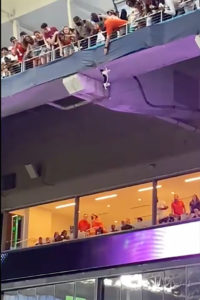 Craig and Kimberly Cromer are season ticket holders for the Miami university football games. Every game they bring an America flag and hang it on the wall behind their regular seats. A few days ago, at the first game of the season, that flag become even more famouser. A cat somehow got into the Miami Stadium and wandered along the upper deck railing before the game. With the crowd and the noise the cat got sacred and slid off the concrete rail and caught itself on the fabric bunting hanging in front of the deck. Many of the fans were transfixed as they watched the little cat try to scratch its way back up to the rail. For all the encouragement shouted the claws just could not hang on. Fortunately, the cat fell on the Cromer family. They had unhooked their flag and held it open like a net to catch the kitty. The petrified cat fell, bounced a bit off the flag and eventually was secured by some folks in the student section. He “held the cat up to the crowd in “Lion King-esque” fashion and earned as loud a round of applause and cheers. The cat, while shook up, appeared to be unhurt by the fall and the crowd loved it.

Where are people in Dallas staying to avoid getting Covid?
The Cowboys Stadium. Because they can’t catch anything there.

Humans can catch diseases from monkeys and bats, but why not anteaters?
Because they are filled with anty bodies.

China may be catching up to the US economically…
…but they definitely won’t outweigh us.

I’ll tell you what always catches my eye.
Short people with umbrellas.

Just when the caterpillar thought the world was ending, he turned into a butterfly.

Hooray for the Red, White and Blue