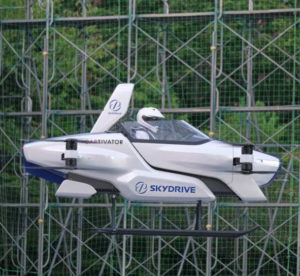 Tokyo-based SkyDrive, showed off a test flight of its SD-03 flying car model earlier this month. The video was released on Friday. The single-seat car, powered by a battery and four pairs of propellers, lifted to six feet above the ground and hovered in a netted test area for about five minutes. Most significantly, the car had a pilot on board. Toyota aims to turn the prototype into a two-seater commercial vehicle to roll out flying taxi service in dense cities like Tokyo and Osaka. A flying car, or vertical takeoff and landing (VTOL) vehicle, is designed to provide quick door-to-door transportation by both ground and air. The SkyDrive car is just small enough to fit into two average parking spaces and would be ideal for urban use.

A chap is flying in a hot air balloon but is lost. He sees paddy below and shouts, “Hey, do you know where I am?”
Paddy says, “You can’t fool me, you’re up there in that little box.”

Air traffic control – Flight 417, please confirm your location, over..
Pilot – This is Flight 417, we are in the sky, over

A stork was flying with an old Delaware senator in its beak. After a while, the old man turns to the stork and says: “Come on, man! Just admit we’re lost”

I’m generally shy about asking taxi drivers to slow down, but when he went through his third red light and careened around the corner, I could no longer keep silent. “Excuse me,” I ventured, “Would you mind slowing down a little?” the driver looked back at me. “What’s the matter?” I explained, “I have been in accidents before,” “That’s nothing,” he said proudly. “I’ve been in over 100 of them.”

The car of the future?