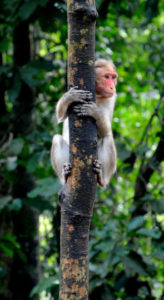 Bad news for those who have adopted coconut milk as their go-to replacement for real dairy. A number of major U.S. grocery store chains are pledging to not stock coconut products from Thai suppliers accused of using slave labor to harvest their coconuts. But it’s not people the producers are enslaving. Instead, they are using monkeys to pick the nuts from their palm trees. Walgreens, Food Lion, Giant Food, Costco, and Stop & Shop have all stopped stocking coconut products from the accused producers using Monkey slavery. PETA claims that upon visiting eight coconut farms. “Terrified young monkeys in Thailand are kept chained, abusively trained, and forced to climb trees to pick coconuts.” “According to an industry insider, most coconut that comes from Thailand was picked by monkeys.” Are the Thai coconut farms engaging in monkey slavery, or is this a case of PETA monkeying with us?

My brother recently adopted a chimp.
Well, I’ll be a monkey’s uncle.

Did you know before they had Monkey bars
Monkeys would just drink at home.

The art of being wise is knowing what to overlook.