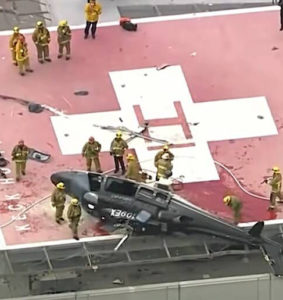 Cardiac surgeon Mark Cunningham waited anxiously for the package coming in by helicopter to save a life. Imagine the shock when, just like the movies, the helicopter got blown over on the helipad on top of the hospital tearing off the rotors. This time though the news is mostly good. In a few minutes, emergency crews cut the pilot and two nurses out of the plane along with the donor heart packed in ice. After the heart was examined, the hospital concluded that the organ could be transplanted into a patient a few hours after the incident. The operation went smoothly and that the heart recipient was recovering well. Organ recipients are matched by the United Network for Organ Sharing (UNOS) based on a number of criteria, such as the severity of the recipient’s need and travel time.

What’s the worst time to have a heart attack?
During a game of charades.

To my crush, I gave you my heart
But then realized you need a brain.

What has 13 hearts but no organs?
A deck of cards.

The only limits in your life are those that you set yourself.