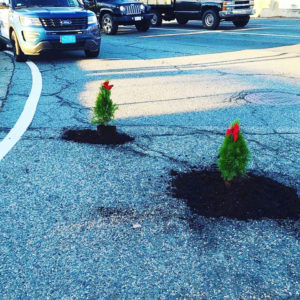 Kevin Martin said he was on his way to pick up dinner in North Attenborough, Massachusetts when he hit a series of potholes on Route 1 and ended up with all four of his tires flattened. Martin said he had previously complained to the town and state governments about the potholes, but no action was taken. “I needed to make sure that it got fixed one way or another. I know that I’m not the only person who’s gotten flat tires from that area.” Martin said he went to Home Depot and bought some planting soil and some small Christmas trees. He planted the trees in the potholes on his way to work Monday morning. Martin said he wanted to force officials into taking action to fill the potholes. His gambit appears to have worked, as the trees were removed and the potholes filled.

Today, my friend warned a pedestrian about a pothole
I guess that makes him a trip advisor.

Why is it when you pass by road construction crews on the highway they are all men except the woman was holding up a sign that says: “Slow Men Working.”

I couldn’t believe it when they told me my brother was a construction site thief,
But when I got home, the signs were there.

A tree grows in Massachusetts