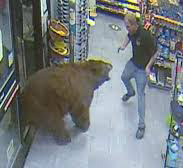 The neighborhood around Lake Tahoe, California had an ongoing problem. They were frequently visited by a “habituated bear,” meaning it has become used to encountering people and having no negative consequences. This particular black bear has walked into the local Safeway supermarket for suppers. He also has shopped at a gas station so often they had to turn off their automatic doors, He also crashed an outdoor birthday party:  “The bear walked right up in the middle of everybody and sat down at the picnic table and started eating the birthday cake they had, right there.” Fish and Wildlife relocated the bear “to a large expanse of wild, suitable bear habitat,” officials wrote. To make sure it doesn’t make its way back to civilization, they put a GPS tracking collar on the bear. Fish and Wildlife shared a video of the release. Officers honk a car horn, shout and fire beanbags at the bear to scare it out of the trailer and into the woods.

There goes the neighborhood

A tired mom opened the front door of her home to find a young minister from the neighborhood Who said, “I’m collecting donations for the new children’s home we’re building. I hope you’ll give what you can.”
The beleaguered woman said, “I’ll give you two boys, two girls, or one of each.”

Why can’t a Prius drive through an Amish neighborhood?
No Outlets.

Everyday, I tell the wife I’m gonna do a few miles around the neighborhood for exercise. And I never do lol.  It’s a running joke I have

My next door neighbor hasn’t done an honest day’s work in her entire life.
She’s a politician.

If you cannot do great things, do small things in a great way.

Sending a bear into the woods