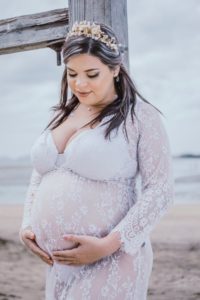 Karen Briceno Gonzalez, an employee of the Orange County Supervisor of Elections, said she was processing voter ballots about 2:30 p.m. Tuesday when a man came in with his wife’s driver’s license. The man explained his wife was outside in the car and wanted to cast her vote. “I go, ‘We need her here,’ and he basically told me that’s gonna be a problem because she refuses to go to the hospital until she votes.” The man explained his wife was in labor and insisted on voting before going to the hospital. So the woman in labor filled out her ballot while doing a little controlled breathing. “I understand the importance of this election to some people. I gave her an ‘I Voted’ sticker, and she was on her way to the hospital. She was very happy that she got to vote.” Elections officials said they plan to send the woman a onesie reading “First Vote” for the baby, as well as some “Future Voter” stickers.

An older man goes to polling place. He approaches the polling official and ask if his wife already voted. They ask for her full name and sure enough, she had already voted. He said, Oh darn! She died 6 years ago but she keeps voting in every election and I was hoping to see her once again.

Asking an incumbent member of Congress to vote for term limits is a bit like asking a chicken to vote for Colonel Sanders.

Why does Joe Biden secretly want to lose the election?
Because if he wins, he’ll have to move into one smaller house in a black neighborhood.