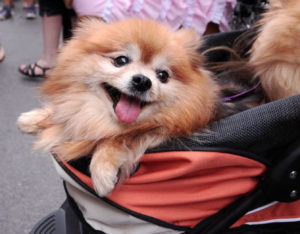 There is a baby shortage in Taiwan, the island off China where there is Democracy. A stroller on the streets of Taipei is seemingly just as likely to carry a puppy as a human baby these days. because there are now more pets than children in Taiwan. More people have been adopting pets as the country’s birthrate has declined. “Dogs in Taiwan are pampered and well cared for, but can also be an accessory to show off, and the more portable the better.” Taiwan officials estimated there were close to 3 million pets in the country, a number even larger than the number of children under age 15. Japan’s pet population has outgrown its child population since 2003. Taipei city, with a population of about 2.7 million, has more than 120 pet-oriented hospitality businesses as of last year that offer “gourmet” pet menus with human-grade ingredients. Accessories have also become more popular for pets: it is common to see a dog sporting a raincoat or sunglasses or socks.

Why was Pavlov’s dog’s hair so soft?
Because he conditioned it

I can’t take my dog to the pond anymore because the ducks keep attacking him..
Guess that’s what I get for having a pure bread dog.

Learn from the mistakes of others. You can’t live long enough to make them all yourself

Dogs on the bus

Carried away with animals