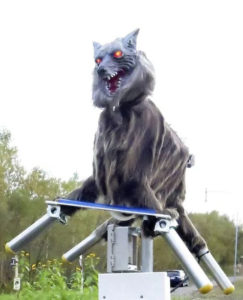 Many years ago Japanese farmers eradicated wolves that were eating livestock. Since then they have been waging an ongoing battel with a growing number of Bears, wild Boars and deer which eat their crops in the field. So rather than try to shoot the animals they have invented a new predator which they can control. The robot Wolff. The beast is about the same size as an actual wolf. It also has tufts of gangly hair and an impressive set of white fangs. When the robot wolf senses a creature nearby, it uses a wide range of sounds, including a gunshot, a howl, and a human voice, to frighten away the would-be diner.  Of course, any humans who are unfortunate enough to stumble into the vicinity are also likely frightened away by claps of gunshots. The first official trial of the robot wolf just ended and  it was a resounding success.

What did the shepherd say to his dog when he saw a wolf?
Let’s get the flock out of here

What do you call a wolf that has things figured out?
Aware wolf.

I believe that imagination is stronger than knowledge and that dreams are more powerful than facts.

Howling and then gunshots